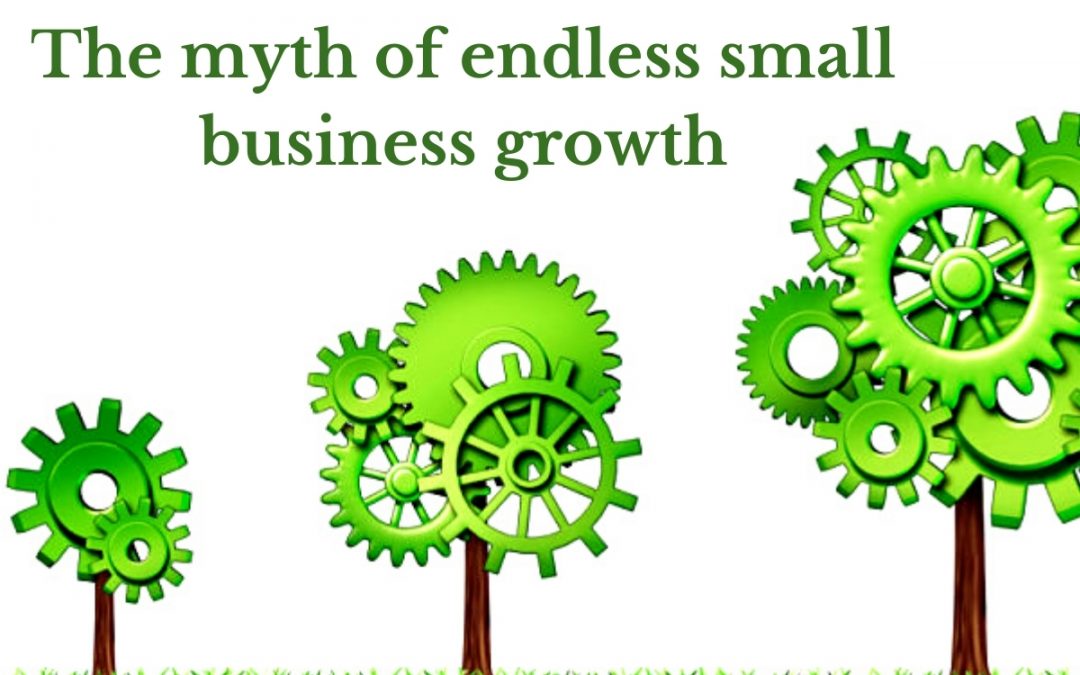 Not the only ways forward for business – a reality check

Diversification, pivoting and small business growth hacking! They seem to be the buzzwords across the internet. Every business owner is supposed to be seeking growth, preferably on an exponential curve, and almost at any cost.

And if at first you don’t succeed, pivot, diversify, add more products/services, add more staff and then grow, grow, grow.

Endless small business growth is what everyone’s after isn’t it?

Um no. Turns out that the magic unicorn’ that is triple, quadruple or quintuple figure small business growth year on year is something of a furphy. You might be able to sustain significant small business growth in your first year or two, but after that, is when the ‘digging in and digging deep’ that is building a business kicks in.

The problem with the myth of endless small business growth

The problem with believing that small business growth is the ultimate goal is two-fold.

First, it gives us all an expectation that if we’re not living up to the double, triple, etc figure growth we hear about so often, we must be terrible business owners, ‘failing’ at business.

And that’s simply not true. Out of the 2.1 million small businesses in Australia, 1.3M are sole traders. More than a quarter of all small businesses (regardless of structure) make less than the minimum wage each year. So if you’re making more than around $40K a year in your business after costs (but before tax) you’re doing better than many others. Surprised?

What was even more surprising is that more than two thirds of small businesses turnover less than $200K – yes you read that correctly. That’s turnover, not profit. That’s not a judgement on the dollar figures per se, but rather a statement that it behooves us all to realise that the bar for ‘business success’ isn’t as high as we might believe it is. It’s not necessarily measured in millions or billions.

And second, believing in those furphies and falsehoods can lead to some really bad decision making.

If all you’re chasing is growth, the mantra becomes growth at any cost. And despite its success for a relative few behemoths (i.e. the Facebooks of the world that got in at the very, very beginning of the internet boom and rode the wave) real business owners know that growth comes from understanding customers and then consistently supplying what they’re after in a reasonably focussed way. For years. For decades.

Not because they diversified. That may work for investment portfolios, but not so much in business. Be the specialist who understood real success takes time, focus and staying the course.

Somewhere in that focussed decades-esque timeframe, there are likely to be economies of scale or increases in market share because you’ve outwitted, outplayed, or frankly just outlasted (or purchased) your competition along the way.

Growing, growing, growing on the other hand, usually requires up-sizing your staffing load and its costs in order to increase capacity for growth, then attempting to back-fill with revenue, then growing the team again. And of course, the more team you add, the more team you add because those people require managers, HRs, assistants, etc. Maybe in the desperate desire to find that magic growth you’ve pivoted and changed your core products/services and that too has incurred costs. And of course if you can’t find or sustain the customer load to keep the team occupied, well then there’s a world of pain for them (and you), financial losses and all round problems.

So if you’re a business that’s turning over more than $200K, especially if you’ve made it past the five year mark, congratulations. You’re in the minority.

If you’re in the early stages of building a business you’d like to see sustain you for decades to come and you’re after a neutral sounding board with real understanding and experience, we’d be delighted to talk to you. You can call us on 6023 1700 or drop us a note via the form below.